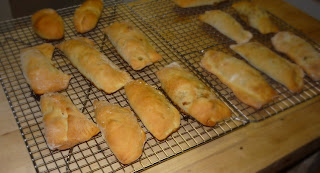 Since Victor was the one who first introduced me to piroshki (as opposed to pierogies, which I grew up eating), it seems only fitting that he was the one to decide that we should make our own piroshki. Although Seattle has some kickin' piroshki options, we both miss St. Paul's funky-yet-awesome Russian Tea House, so this is something of a nostalgia thing for us, I guess.

Victor also was the one who ended up making them from start to finish. He combined two recipes to begin to approximate the Russian Tea House ones, which are somewhat doughy and beefy. The filling is from this recipe; the dough from this one (we were skeptical about the "sunshine sauce" and skipped it entirely).

They were delicious and made the house smell wonderful. Seattle's on track to have its warmest January ever recorded, so we didn't really need this hearty winter fare, but it was comforting nonetheless.
at 9:13 PM

MK
I’m an Easterner, transplanted to the Midwest. I relocated to the PNW from Minneapolis in 2007. I’m a full-time PhD candidate who’d rather cook than work on her dissertation any day.

When I first started to be interested in cooking, I got myself a big orange binder and divided it into sections. I saved recipes in the front (organized by type) and in the back, I put a bunch of lined paper. Every night when we made dinner, I’d write down the recipe title, and where it came from. Sometimes I’d write what wine we had; sometimes I’d record who had been there. I usually made some notes about whether we’d liked it, and if we made any changes.

After a while, it became cumbersome to find things in it. I’d think “hmmm, I *know* I made some really tasty thing with roasted shallots and butternut squash," but I wouldn’t be able to find the note about that dish. It drove me nuts. Especially as I started to do more and more from-scratch cooking (often without a recipe) and also as I now had many sheets of paper recording years of dinners. I thought – there just has to be a better way.