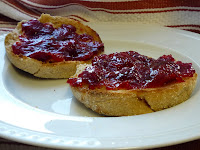 As I so often do, I ended up going a little overboard with the canning this weekend. This month's can jam is everything berries, and I'm thinking I should pick just one of the following recipes for my entry... it's so hard to decide, though! They all turned out wonderfully, but I think that the "oven-roasted strawberry jam with rosemary" is my favorite.

Two weeks ago, we went to our usual Sunday market, sampled strawberries from all the organic vendors, and found only one place with truly flavorful ones. (It's been so wet here that the berries are a little watery, I think.) Typically, they were also the most expensive strawberries at the market. I asked if they had any seconds, and it turns out that they bring all their seconds to the Saturday market and sell them by the bucket. With no idea what size that bucket was, we tentatively decided to go to the Saturday market the following weekend.

Here is what we ended up with on Saturday: 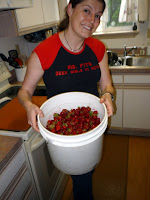 It wasn't labeled (other than with price - it was $20), and I neglected to weigh it or otherwise figure out precisely how much was in that big bucket. It took us about 3 hours to hull and quarter all the berries, enough to make 20 half-pint jars of jam, plus however many berries we ended up eating as we worked.

We spontaneously decided to break in our new pasta maker, so partway through the hulling process, Aaron came over and he and Victor made linguine: 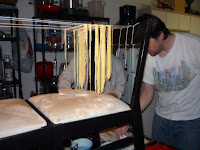 (why didn't we cover the chairs? no idea)
Meanwhile, I divided the strawberries for different recipes and let them macerate. We ended up with:
For all but the oven-roasted jam, I used some Pomona's Pectin to thicken the liquid slightly. It still has a "European-style" lightly-gelled set, but I didn't need to fuss with it as much to get there. Because I hadn't originally intended to use the pectin, I ended up mixing the pectin power with just a few tablespoons of sugar and blending that in for the last few minutes of boiling. In a few cases that led to some clumping, so I think that in the future I'll try harder to remember to add it when I add the bulk of the sugar (prior to letting the strawberries macerate).

My adaptations mostly had to do with forgetting to keep the rhubarb and strawberries separated during the maceration (hence the "lazy" in the recipe title).

Toss prepared rhubarb and strawberries with sugar, zest, and juice. Allow to macerate at least an hour (mine sat for maybe 5 hours - overnight would be fine, too).

In a large sauce pan, cook over medium heat for 20 minutes, stirring to prevent scorching. If you want a little fruity kick, add the Kirschwasser, too. (If you're using Pomona's Pectin, add the calcium water early in the cooking process.) During the last 2-3 minutes of cooking, stir with a whisk to break up the fruit into a sauce, if desired.

Combine berries and sugar and allow to macerate, two hours (up to a day or so). Stir to mix in the sugar occasionally.

In a large saucepan, add lemon juice and bring to a boil over high heat. Reduce heat a simmer, and continue cooking for 10 minutes.

Pour into two 13" x 9" pans, add two sprigs rosemary to each pan, and bake in a warm oven for 10-12 hours. (The directions say to use a 150F oven - the lowest my oven will do is 170F, so that's what I used. It worked fine. If using a convection oven, apparently the process only takes 2-4 hours.) Stir occasionally. Keep baking until the mixture has thickened and will form a gel.

The Zuni Cafe roast chicken recipe is pretty much the only one I use. Once in a while I'll dally with another technique for roasting the bird, but I always come back to this. It is especially good if you have time to let the chicken rest for three days before cooking, though two or even one day of rest will still give you a delicious dinner.

I don't bother with the herbs - I don't think their flavor gets into any of the meat that's not in direct contact with them. I also have decided that the pan drippings are put to better use in a gravy than in the bread salad she suggests (I say this even after having had the chicken/bread salad at Zuni in SF... it's good, but not worth giving up gravy for). I usually add some stock to the pan after I take the chicken out, but this time I made the gravy with some white wine we had in the fridge - definitely a tasty addition.

Last night we also roasted some sweet potatoes while the chicken cooked - they were tossed with olive oil/salt/pepper. I think I ended up having them in the oven for about half the chicken's cooking time. I'd also planned to make Michael Ruhlman's braised kale, but as I started cooking I realised two things: I didn't have most of the ingredients, and my 475F oven was likely too hot. What I came up with was probably the best kale I've ever eaten, though, so it all worked out in the end.

In a large pan over medium-low heat, cook the guanciale until the fat is mostly rendered and the meat is beginning to crisp. Add the kale and turn the heat up to medium. Cook, stirring frequently, until it has started to wilt. Add a pinch or two of salt, a grind or two of pepper, and the red pepper flakes. Cover, and cook over medium-low heat for 15-30 minutes (honestly, I have no idea how long it was cooking for... until it looked done, I guess). When it's mostly cooked, add the honey and sherry. Cook off the liquid, taste, and add more salt or pepper as needed.
makes 3-4 servings

Email ThisBlogThis!Share to TwitterShare to FacebookShare to Pinterest
Labels: recipe

I went on a trip to the recently-relocated Elliot Bay bookstore a few weeks ago. I'm resisting buying more fiction, which I can get from the library, and instead focusing on things I'll reference again and again (like cookbooks!). The "bargain" section there was very well stocked, and I ended up buying three new books.

Quick & Easy Vietnamese is a book I've been meaning to get for a while, and so far it's been great. The first recipe I made from there - Lemongrass Chicken - was perfect & easy. The second - Chicken Stir-fried with Fresh Ginger - I loved but Victor pretty much hated. He felt like it had a "mentholated" flavor somehow; I think it must have been ginger overload. I'm looking forward to cooking more with it, since Vietnamese is mostly what we get when we go out to eat, and this book truly does make it simple. Yay!
at 7:59 PM No comments:

Email ThisBlogThis!Share to TwitterShare to FacebookShare to Pinterest
Labels: cookbooks

Email ThisBlogThis!Share to TwitterShare to FacebookShare to Pinterest
Labels: menu

Email ThisBlogThis!Share to TwitterShare to FacebookShare to Pinterest
Labels: menu

pickles: an exercise in delayed gratification

Although I just missed the deadline for the asparagus portion of May's Can Jam, I did actually pickle a few jars. Of course, since they're still pickling, I have no idea how they taste. They sure do look pretty, though. (If the sun comes out in western WA again, I will take some photos.)

"Herbed Asparagus Pickles," adapted from The Complete Book of Small-Batch Preserving: the only changes I made were that I used 12 oz jars, so the recipe only made 3 jars' worth of pickles and that I substituted baby Walla Walla onions for the shallots called for in the recipe.
at 10:39 AM No comments:

I recently signed up for a "boot camp"-style fitness class at the local Y. It meets very early in the morning, so I don't eat much of anything beforehand (I just have a glass of milk). I'm hungry when I get back, but (so far at least) I mostly just want to fall down somewhere and not move for a while. This is a simple little meal that I can just sit down and eat: whole-wheat couscous cooked in orange juice (heat juice in microwave for about 2 minutes, add couscous, and let sit for 5 minutes). I add some dried cranberries and walnuts and top it off with some drained yogurt (which is similar to store-bought Greek yogurt, I think). With a sprinkle of cinnamon on top, it's quick, tasty, and nourishing.
at 11:19 AM No comments:

MK
I’m an Easterner, transplanted to the Midwest. I relocated to the PNW from Minneapolis in 2007. I’m a full-time PhD candidate who’d rather cook than work on her dissertation any day.

When I first started to be interested in cooking, I got myself a big orange binder and divided it into sections. I saved recipes in the front (organized by type) and in the back, I put a bunch of lined paper. Every night when we made dinner, I’d write down the recipe title, and where it came from. Sometimes I’d write what wine we had; sometimes I’d record who had been there. I usually made some notes about whether we’d liked it, and if we made any changes.

After a while, it became cumbersome to find things in it. I’d think “hmmm, I *know* I made some really tasty thing with roasted shallots and butternut squash," but I wouldn’t be able to find the note about that dish. It drove me nuts. Especially as I started to do more and more from-scratch cooking (often without a recipe) and also as I now had many sheets of paper recording years of dinners. I thought – there just has to be a better way.